Once you cross that finish line, it will feel like you've been running forever.


Team Kimmel consists of the members of the Kimmel Family who either walk or run long distance races. Membership is open to anyone who is related to us by marriage or blood or who we happen to feel like having on our team including but not limited to complete strangers none of us have ever met before. 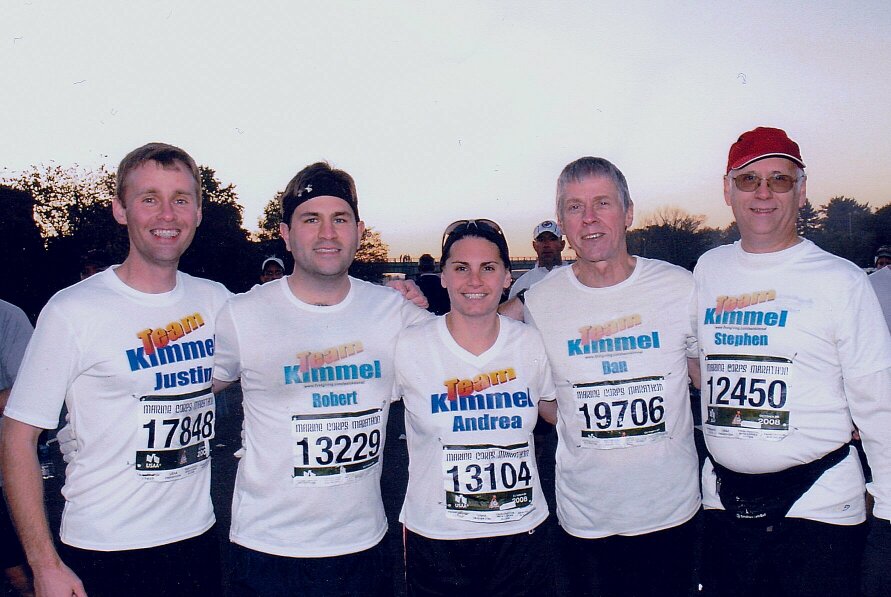 Team Kimmel posing by the dawn's early light before the Marine Corps Marathon.

First timers with the team are Justin and Andrea. 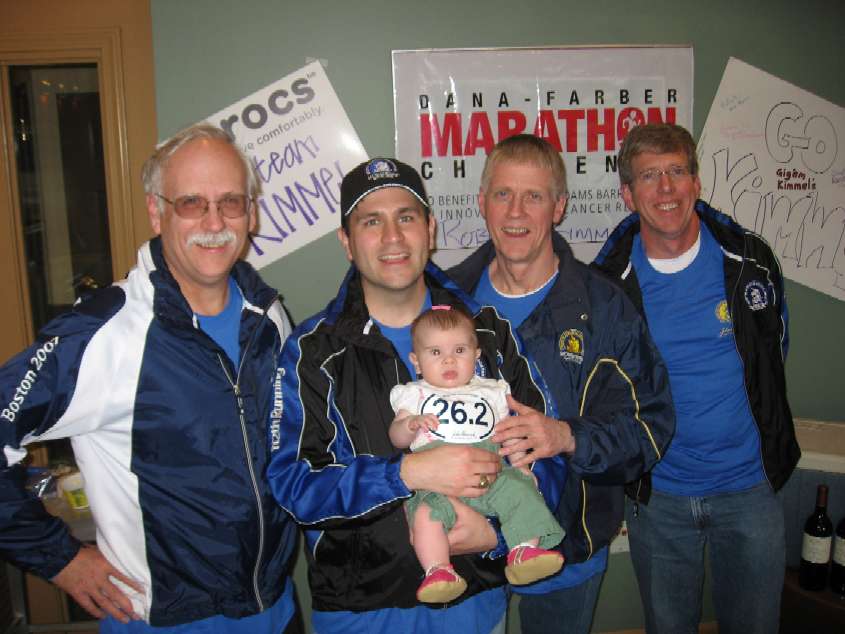 
Appearing with the team for the first time is our latest addition, Chiara Rose Kimmel, who, unfortunately was unable to complete the Boston Marathon owing to the fact that she has yet to master crawling. She was actively cheering for her Daddy, her Grandfather, and their cousins. Either that or her diaper needed changing. 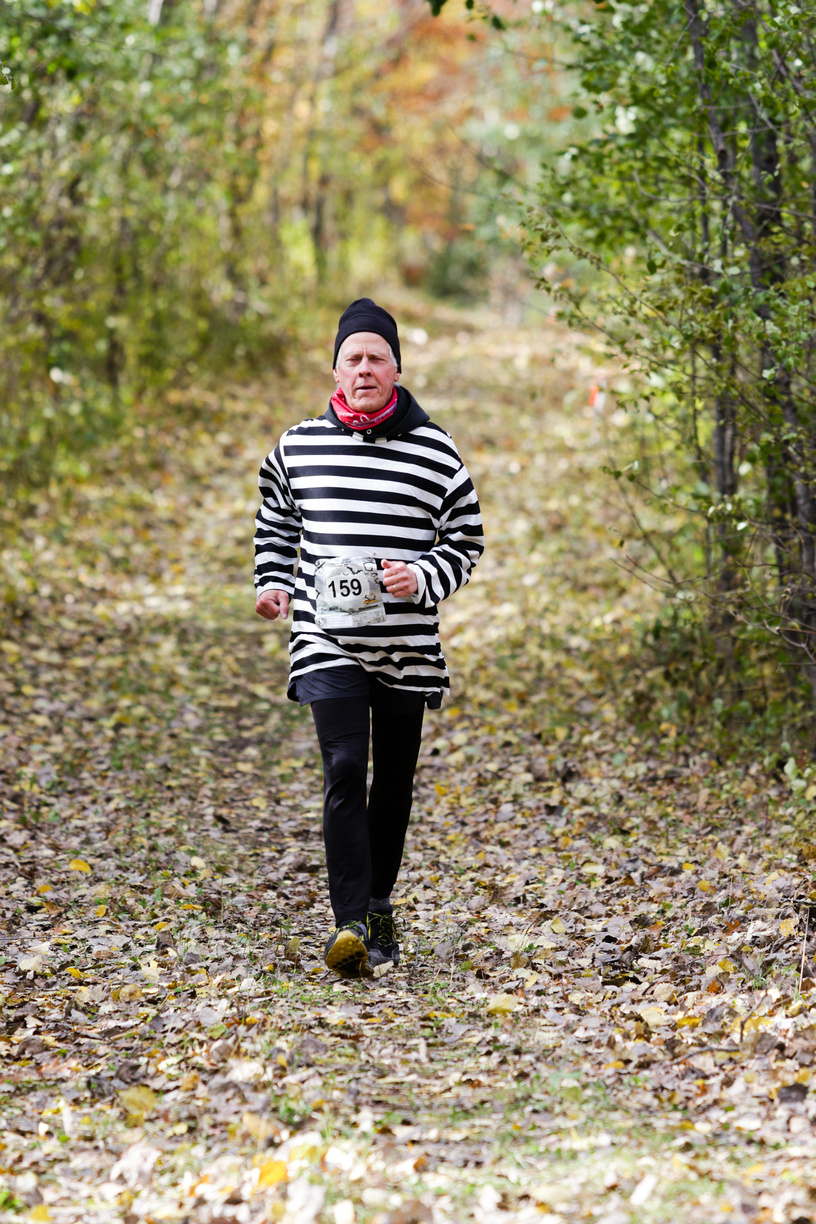 After years of trying to get the team together at the New York City Marathon, we finally gave up trying to do it as a team race. Dan's first attempt at New York ended up being washed out by Hurricane Sandy. Never one to let a good running opportunity go, Dan and several others ended up running at Central Park. Stephen who finally lost the lottery enough times seized the opportunity to do the race in 2014 just as the race committee decided to change the rules. In 2015, Dan took the opportunity to do the race officially this year.

Meanwhile, Stephen did the Indianapolis Monumental Marathon as a pacer in the role of "The Grim Sweeper," the last pacer and the visible sign to the stragglers that their marathon was over. Stephen described it as being a surreal experience since he had a police escort and the "sag wagon" immediately behind him most of the way.

Both Stephen and Dan are "working" toward completing their 50 states. Here's where they stand.

May, 2018: Stephen, in a fit of insanity, does Kentucky Derby Festival and Providence Rhode Island on successive weekends. Dan, not to be outdone, does the appropriately named Helenback Marathon in Georgia. Numerous psychiatrists prescribe extensive therapy for both.

March 6,2011: Jon and Stephen pace runners at the Little Rock Marathon in essentially perfect weather. Both finish within three minutes of their target time. The finisher's shirt contains a slogan that all decide applies better to Stephen than to Jon since Stephen's waist is more the sort you would expect for "A Marathoner of Mythic Proportions." 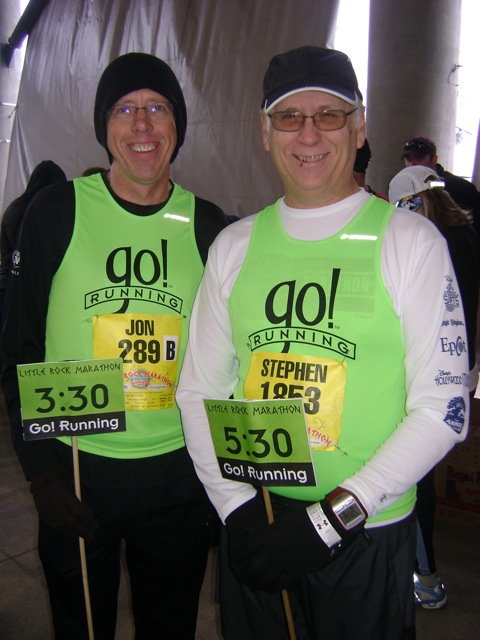 May 22, 2010: Dan completes "a nice training run" at the Fargo Marathon. The course is flat, flat, flat and Dan was only minimally deterred by the high temperatures, 30 mile per hour wind and the cold rain. His only real difficulty came from repeatedly kicking himself. Next event: Jon and Dan do Duluth at Grandma's Marathon.

May 1, 2010: Team member, Stephen, completes the Gusher Marathon in Beaumont, Texas in weather conditions similar to those found in the Amazon rain forest. His time, 4:55:52, would be a lot more exciting if there wasn't the dispute of the course length. Apparently, the question "How long is a marathon?" isn't such a bad one, afterall.

March 7, 2010: The three old men of Team Kimmel, Stephen, Dan and Jon, successfully fulfill their duties as pacers at the Little Rock Marathon. Stephen and Dan celebrate by joining the 50 state club, a group dedicated to completing marathons in each of the 50 states and by extension make Stephen and Dan's level of marathoning look reasonable. Stephen's youngest, Ariel, joined her father during race weekend completing the Little Rock 5K. 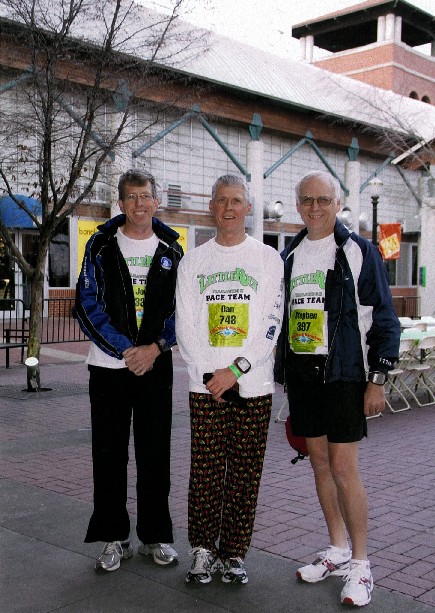 Stephen with one of his athletes.

Dan just does it for the women. 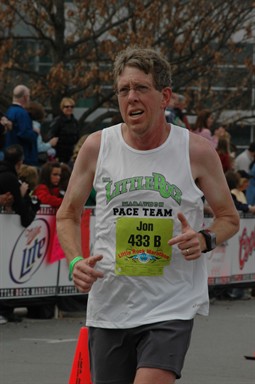 Jon near the finish.

January 10, 2010: Four members of the team including first timer, Jane Wardle-Kimmel, enjoyed the Florida sunshine and hospitality as they competed in the Walt Disney World endurance races. Jane completed her first half-marathon in freezing rain, sleet, and snow in 3:32:01 cheerfully calling out "I am NEVER doing that again!" Her next race will be the half marathon in St. Louis. Justin set a team record for successfully completing a marathon with the least amount of training and preparation having done a five mile run in July. Dan and Stephen completed America's most appropriately named event, the Goofy Race and a Half Challenge in which the athlete must do the half marathon on Saturday and the full marathon on Sunday. As one of the race speakers put it, "For all you Goofy people... What were you thinking when you signed up for this?" 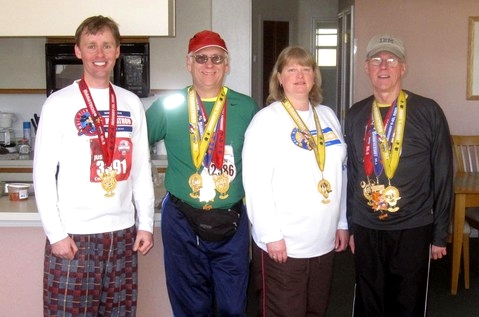 Justin, Stephen, first-timer Jane and Dan showing off their medals after the
Walt Disney World Marathon and Half Marathon


November 22, 2009: Stephen Kimmel completes the Route 66 Marathon in Tulsa, Oklahoma in 5:22:16. The course had been rearranged from earlier years to put the hilly sections at the front followed by a long flat section into a strong headwind followed by another long flat section of dragging yourself to the finish line. One of the highlights of the race was an individual who set a new world record of 2:32:05 for running the marathon while pushing an occupied baby stroller. Stephen immediately attempted to recruit him to the team only to discover that he had already gone back to his hotel, showered and flown home by the time Stephen finished.

Three members of the team, Jon, Stephen and Dan are signed up to lead pace groups at the Little Rock Marathon on March 7, 2010.

Events page updated for the team's next event... The Walt Disney World Marathon and Goofy Challenge.

October 4, 2009: Dan Kimmel, continuing his streak of recent marathons, finishes the Twin Cities Marathon in 3:38:23, once again qualifying for the Boston Marathon. Weather was good with a high temperature of 50 degrees during the race. Locals noted that the weather was much cooler without Stephen Kimmel present.

August 8, 2009: Dan Kimmel, completing his third marathon in seven weeks, finished the Paavo Nurmi Marathon in Hurley, Wisconsin today with a time of 3:46:55. Long time Wisconsin resident, Georgia Kimmel, remarked that she had no idea where Hurley was. Dan's time was just 11 seconds off his previous time at the University of Okoboji Marathon in Okoboji, Iowa. Georgia Kimmel, whose family routinely summered in Clear Lake, Iowa, commented that she thought Okoboji was "somewhere near Spencer isn't it?"

July 28, 2009: Jon Kimmel attacked by large bird during training ride. Apparently his cycling helmet was mistaken for a tasty treat.

July 25, 2009: Stephen Kimmel joined the marathon training organization KatyFit as an Assistant Coach for their walkers group. Average speed for the walkers in that group is approximately 16 minutes per mile.

June 20, 2009: Stephen and Dan Kimmel come close to setting PW's (Personal Worsts) in the blistering heat of northern Minnesota. According to one local source, the temperature at the end of the race was over 90 degrees. Combined with the low humidity guaranteed by never being more than a few hundred yards from the largest body of fresh water in the world, new records were falling like runners suffering from heat exhaustion. Dan promises cooler temperatures for next year.

Mar 15, 2009: Jon Kimmel completed the Little Rock Marathon with a time of 3:14:54. Jon was the 3:15:00 pacer and coming in six seconds early was considered acceptable. Jon also discovered that despite the marathon's slogan, "What hills?" that Little Rock does, in fact, have one or two hills.


Jan 18, 2009: Stephen Kimmel completed the Houston Marathon in 5:10:13. It was his best time ever at Houston and his personal best after "cratering."

Jan 6, 2009: All Team Kimmel members are reminded that registration will be opening in the next two weeks for our next two team races: Grandma's Marathon in Duluth, Minnesota and the Disney World Marathon in Orlando, Florida. Grandma's generally sells out with a few days of the start of registration. Disney World takes longer to sell out for the marathon but the Goofy Race and a Half sells out quickly.

Nov 16, 2008: Jon Kimmel set a new personal record (PR) at the Route 66 Marathon in Tulsa, Oklahoma. His time of 3:05:56 qualifies him for both the Boston Marathon and the New York Marathon.

October 26, 2008: Five members of Team Kimmel raced in the Marine Corps Marathon in Washington, DC. It was the largest group of racers the team has ever fielded as Dan, Stephen and Robert were joined by Andrea and family friend, Justin Strickland. For Andrea and Justin, it was their first marathon. Results are shown on the results page.

May 25, 2008: Ken Coffeen, not a member of Team Kimmel but a relative, completed his first distance race, the quarter marathon in Madison, Wisconsin.

May 6, 2008: Six Team Kimmel members confirmed as racing the Marine Corps Marathon, October 26, 2008 in Washington, DC. Joining the four who raced in the Boston Marathon will be Andrea Kimmel and Justin Strickland. Justin met the Team's rigorous qualification criteria by being "Kalyn Kimmel's Aggie boyfriend." Close enough, Justin and welcome to the team.

April 21, 2008: All four Team Kimmel members completed the Boston Marathon today. Two members, Stephen and Robert, set new Personal Records. Stephen improved his PR from 5:06:53 set at last year's Boston Marathon to 5:03:44. Robert improved his previous best to 4:50:44. Dan, the most veteran racer of the team, did improve on his time in last year's race but was too busy recovering from running around South Boston with the Hash House Harriers to care much about personal records.